Understanding the Relationship of Credit Cycles and Interest Rates

When most economists discuss changes in the fed funds rate, the most commonly discussed relationships are unemployment, gross domestic product, and inflation expectations.  However, credit conditions are often indicators of banks’ willingness to lend that helps sustain, inflate, or deflate economic activity.  A result of this basic concept, we began evaluating bank charge-off rates, gross domestic product, and the federal funds rate over the last 30 years.

The last observed low in charge off rates was set in the 3rd quarter of 2015 at 0.42%. The current charge off rate is 0.45% with the slight uptick predominantly traced to stress in agriculture and energy.  These are two markets that have a higher correlation to commodity prices and the value of the US Dollar.  We have also seen corporate profit growth stumble over the last six quarters, further supporting the uptick in charge offs, as more leveraged companies struggle to service debt. 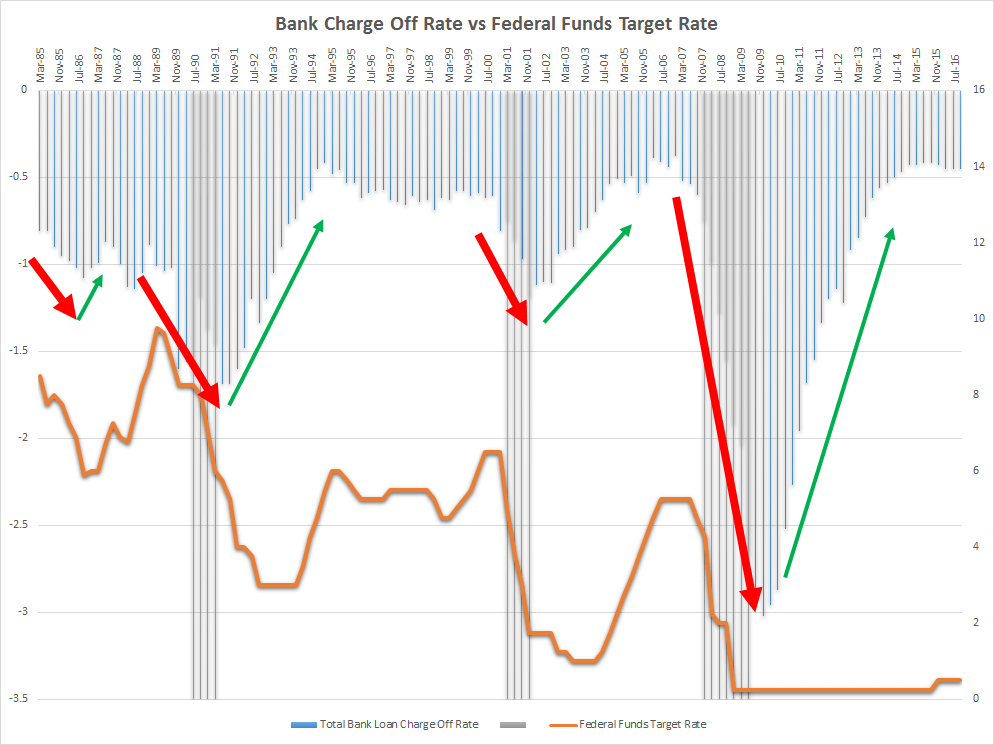 In our opinion, if these cyclical trends continue to hold, we could very well see bank charge off rates peak sometime in 2019 – 2021.  If the Fed is successful in achieving its target rate of 2.5% by 2019 (based on dot plots), there will not be much room to lower rates in a meaningful way, prompting further quantitative easing and potentially pushing 10 year treasury yields below 1.00%.  If in a good economy with low charge off rates 10 year treasury can trade at 1.30% following Brexit vote, it is not unreasonable to model a 10 year treasury yield at 1.25% or lower in a bad or slowing economy with higher charge off rates.  This scenario could compound the drop in already low net interest margins at a time when credit losses accelerate.

So what does this mean for your institution?  When evaluating and preparing for inevitable expansions and contractions in our economy, we should know that the preparation process can often take several years to adopt and implement.  To start off, we have been encouraging our bankers to evaluate their historical loss experience, credit concentration migrations, loan pricing disciplines, and covenants.  Capital stress testing is not only a regulatory mandate, but a necessary exercise in protecting shareholder value.

We have also been encouraging our clients to evaluate their interest rate risk positions for varying yield curve twists, as these scenarios are where most banks are exposed.  We are bankers and not rate predictors.  We should model/measure various interest rate scenarios, including those that appear less likely in the current environment.  For example, modeling a lower flatter yield curve which could continue to compress net interest margins over time.  Having a good handle on the bank’s risk positions will help you understand how your institution will perform in various stages of economic and credit cycles.